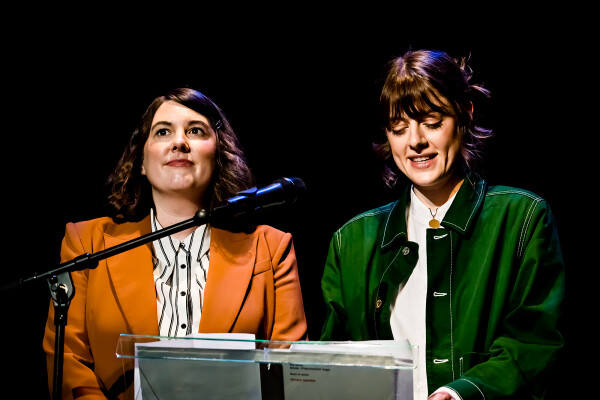 Playmarket is pleased to announce that the winners of the 2022 Bruce Mason Playwriting Award are Eleanor Bishop and Karin McCracken. This is the first time in the award’s 40-year history that it has been given to a creative partnership. The $10,000 cash prize recognises professional success in the career of a writer and is designed to encourage their continued exploration of the theatre medium.

Together, Eleanor and Karin formed EBKM, an arts partnership that produces a range of socially minded, formally innovative, contemporary performance. Their body of work includes the shows Yes Yes Yes, Body Double (with Julia Croft), Jane Doe, Crash Bash 2022 – Leader of the Pack for The Court Theatre and the forthcoming Aliens and Anorexia.

Yes Yes Yes has toured Aotearoa since its premiere in 2019, it has just completed a season in Montreal, Canada and has a season for Auckland Theatre Company in 2023. Part confession, part documentary, part open conversation, Yes Yes Yes is a theatre show created for young people that explores the knotty and necessary topics of healthy relationships, desire and consent. Its awards include Excellence in Theatre for Social Change at Wellington Theatre Awards and Excellence for Overall Production at Auckland Theatre Awards. Yes Yes Yes has been hailed as ‘intelligent, sensitive, honest, empathetic and insightful’.

EBKM’s forthcoming Aliens in Anorexia received the Dean Parker Award at this year’s Adam NZ Play Awards. Aliens & Anorexia is adapted from the book of the same name by Chris Kraus, depicting her attempt to make the feature film Gravity and Grace in New Zealand in the 90s. Weaving in the writings of French philosopher Simone Weil alongside a free-wheeling retrospective of other ‘failed’ artists – Kraus traverses Berlin, Andy Warhol’s New York, Marseilles and New Zealand in a bid to understand what it means to not succeed. Judges of the Adam NZ Play Award described the work as ‘almost flawless’.

Eleanor Bishop is a stage director and writer working across theatre and opera. Recent works include The Strangest of Angels (NZ Opera), Chekhov’s The Seagull - a new online version for Auckland Theatre Company and Boys (Auckland Theatre Company), a deconstruction of Greg McGee’s Foreskin’s Lament. She holds an MFA in Directing from Carnegie Mellon University in Pittsburgh, PA, and received her BA in Theatre (Honors) from Victoria University of Wellington.

Karin McCracken is a theatremaker, writer and performer. Her collaborative works include the award-winning shows Standard Acts (with Meg Rollandi, Arlo Gibson and Julia Croft), Werewolf (Binge Culture) and It’s A Trial! (Barbarian Productions and Binge Culture). Her recent performance credits, alongside the work above, include Cock (Circa Theatre) and Mrs Warren’s Profession (Auckland Theatre Company). In addition to theatre, Karin is a trained sexual violence prevention educator.

Since 1983 The Bruce Mason Playwriting Award has recognised the work of an outstanding New Zealand playwright. The recipient is decided through voting by a panel of leading Artistic Directors, Theatre Programmers and Script Advisors throughout Aotearoa. Previous winners include many of this country’s most celebrated writers including Hone Kouka, Briar Grace-Smith, Jo Randerson, Victor Rodger, Ralph McCubbin Howell, Mitch Tawhi Thomas, Sam Brooks, Mīria George, Nathan Joe and Nancy Brunning.

The Award is named after Bruce Mason, considered to be New Zealand’s first significant playwright. His plays continue to be produced and many, such as The Pohutukawa Tree and The End of the Golden Weatherhave come to be considered New Zealand classics. The award is funded by The FAME Trust and Rachel Underwood.